Ok my friends.......it's been awhile. I've been trying to figure out exactly what I want to do.....I've decided to refinish/repaint/refurbish furniture! My "name" will be The Tattered Princess. I've decided to start a new blog, ya know for name recognition and stuff! So, if you would be so kind as to hop over to my new blog and let me know what you think, I would be very happy! The Tattered Princess

Not 1 but 2 features on my sons military footlocker dresser. Roadkill Rescue and
Better After are 2 blogs I literally check everyday to see what awsomeness there is. Please visit them (daily!) Thank you sooo much Lindsey and Beckie for featuring me! You Rock!
Posted by XXOO AMY at 1:08 PM 1 comment:

Fall is in the Air

The temp here in northern Virginia dropped from 95 to 75 in like 2 days. Ahhhhh it feels soooo good! Don't get me wrong I love summer, REALLY love summer.  But I'm from the U.P. (that's the Upper Penninsula/ Northern Michigan for all you trolls) and you're lucky to get 7 or 8 days a year over 75 up there. So, the heat here in Virginia gets to me after a while! Since it was actually a little chilly last nite I decided to do some fall decorating. 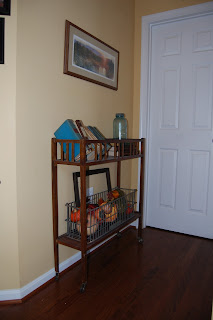 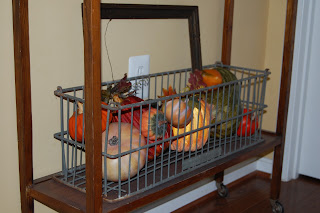 I found this shelf-y thing at the auction. I think maybe it's a plant stand....I don't know, but I love it and it fills the space in the little hallway to the bathroom perfectly. Just add an old frame, a dairy basket, books and pumpkins~love it! 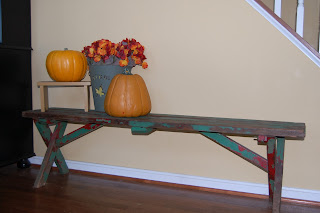 This perfectly chippy, beat up bench is always here, I just added a couple pumpkins. Simple, but it adds so much.... 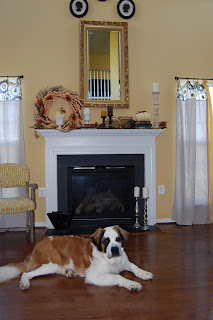 And ofcourse the mantle!
I'm not one to pander my kids and animals on my blog, but she would. not. move! So, this is my mantle featuring my Saint Bernard puppy- Heidi 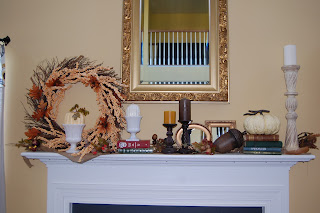 a close up (without Heidi) 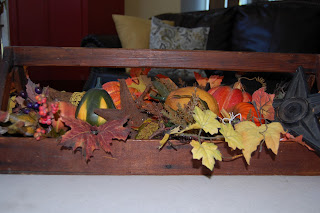 And last but not least, the old tool tray on the coffee table all decked out in fall leaves and pumpkins!

Have you decorated for fall yet?

OK, fine, I admit it

Hey, you wouldn't believe what people throw away! Like this little beauty... 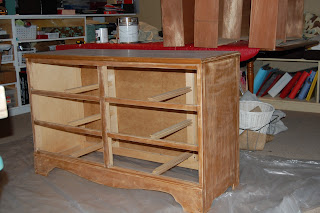 OK, so maybe she's not quite beautiful. Actually, she looks better here than when I picked her up off the curb. I've cleaned her up and sanded her in this picture.
But, in the next picture you can see how awesome she really is!  Maybe I should call her a him, since "he's" in my sons room and "he" is supposed to resemble an army foot locker! 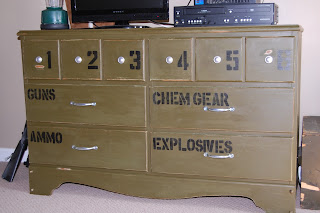 Now, before anybody calls DFS on me, that is a BB gun leaning up against the side of the dresser. And, NO he doesn't actually have a drawer full of guns, ammo, chem gear or explosives in his bedroom. Well, OK, maybe some explosives, but definitely not any chem gear...relax, I'm kidding! 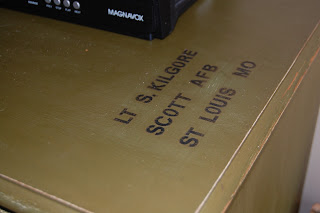 Yes, I know Scott AFB is not in St. Louis, we were actually stationed at Jefferson Barracks, which IS in St. Louis, but honestly, I didn't have enough "S's" to spell all that out. He doesn't care, so neither do I! 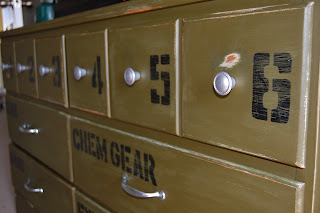 The top drawers are fake, they are really only 2 drawers.
So, not bad for FREE! It gave the boy a little extra storage for his "stuff" a.k.a: guns, ammo, etc.!
I'll be linking this up at the following awesome blogs, go check them out!
Chic on a Shoestring: http://chiconashoestringdecorating.blogspot.com/
Whipperberry:http://whipperberry.com/
Simple Home. Life: http://www.mysimplehomelife.com/
At The Picket Fence: http://www.atthepicketfence.com/
Shabby Creek Cottage: http://www.theshabbycreekcottage.com/
Somewhat Simple:  http://www.somewhatsimple.com/
The 36th Avenue: http://www.the36thavenue.com/
Crafty Scrappy Happy: http://www.craftyscrappyhappy.net/
My Repurposed Life: http://www.myrepurposedlife.net/
Homespun Happenings: http://homespunhappenings-tammy.blogspot.com/
Posted by XXOO AMY at 11:16 AM 10 comments:

Holy cow! my Jane Austen desk was featured at PRIMP! Can you tell I'm excited?! I love the Primp blog, so much inspiration going on over there! Never visited you say... go check them out, they are awesome!

Thank you Michelle for featuring my little desk!
Posted by XXOO AMY at 7:53 AM No comments:

Yes, I can be rather non-committal!

So, in honor of school starting I have a desk for you. It's not really a school desk (that will come next week). I can picture Jane Austen sitting at this desk to write a beautiful novel about the trials and tribulations of a young girl beginning school..... 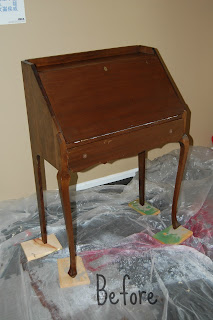 She was really quite lovely to begin with. I got her at the Salvation Army, I paid more than I usually do, but I could tell she had a lot of potential! 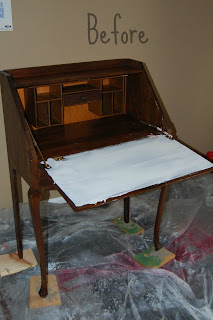 Apparently, someone had thought about painting her before I got my hands on her, but gave up... 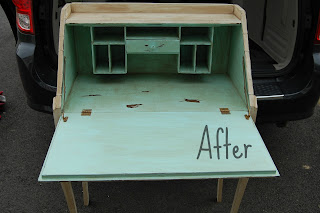 I painted the inside a lovely shade of aqua, then distressed the heck out of it! Next time I will think twice before I decide it's a good idea to wax inside a bunch of little tiny cubbies! 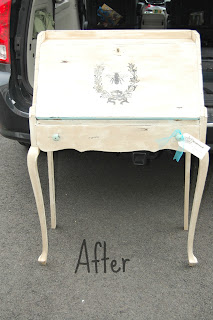 The rest is an off-white with heavy distressing and waxing. I also painted a bee and wreath on the front. For details on how to transfer images onto furniture go to the Graphics Fairy. Not only does she have thousands of graphics, but she gives you several tutorials on transferring them to just about everything!
FYI, if you live in Virginia and you love this little desk, (a love for Jane Austen is not necessarily required)  she is for sale- email me for details!
Linking to:
Primp: http://www.primpjunktion.com/
Uncommon http://www.uncommondesignsonline.com/
Not Just a Housewife http://www.notjustahousewife.net/
The Ironstone Nest: http://www.theironstonenest.com/
Under the Table & Dreaming: http://www.bystephanielynn.com/2012/08/the-sunday-showcase-party-no-115.html
Shabby Creek Cottage: http://www.theshabbycreekcottage.com/
Somewhat Simple:  http://www.somewhatsimple.com/
The 36th Avenue:  http://www.the36thavenue.com/
Chic on a Shoestring: http://chiconashoestringdecorating.blogspot.com/
Fingerprints on the Fridge: http://www.fingerprintsonthefridge.com/
Whipperberry:  http://www.whipperberry.com/
Simple Home. Life: http://www.mysimplehomelife.com/
Remodelaholic: http://www.remodelaholic.com/
Finding Fabulous: http://www.findingfabulousblog.com/
Tattertots & Jello:  http://tatertotsandjello.com/
Doodles&Stitches http://www.doodlesandstitches.com/
At The Picket Fence: http://www.atthepicketfence.com/
Homespun Happenings: http://homespunhappenings-tammy.blogspot.com/
Posted by XXOO AMY at 9:00 AM 9 comments:

I have a dirty little secret...

Yay! Have you been to Lindsay's blog BETTER AFTER? No? What are you waiting for? There are several amazing chair re-do's right now, as we speak! Not to toot my own horn (ok, well, maybe a little tooting here) but she has kindly featured mine too! Go check out all the awesomeness! 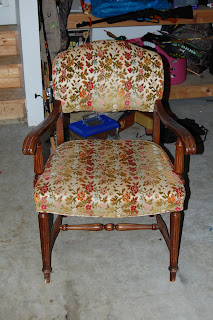 It cost $14.99 at The Salvation Army. I couldn't pass it up. And actually the fabric is in excellent condition  if you're into velour green and orange floral, which I'm not.

So.... I made my own chalk paint by mixing plain ole latex paint and a spoonful of unsanded grout and a tiny bit of water and painted the arms and legs. Here's where the cheating comes in...

I found this awesome material and hot glued it right over top of the old fabric. Yep, I did. I layed the fabric on top, pulled it underneath and glued it right to the chair. Why? Because I'm lazy. Plain and simple. I didn't want to rip all that off and hammer the new stuff all back on. Been there done that (see the houndstooth chair from hell here)

I think she looks pretty darn good if I do say so myself! 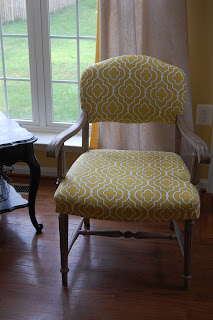 I'm quite smitten! Now she matches my new curtains, which I will be showing off next week!

XXOO AMY
Hi! Welcome to my little blog! I hope you find something here to make you laugh, inspire you or make you think! This little blog is where I will showcase the items that I repaint/redo/refurbish. I love to decorate, and DIY! Leave me a comment and stop back often! Thanks!